skip to main | skip to sidebar

During my hiatus from this blog due to unforeseen unfortunate transferring of photos and information to a "cloud" by one of my offspring, I seem to have all photos someplace floating around somewhere but unavailable to me. Who would have ever guessed?????

TECHNOLOGY IS WONDERFUL UNTIL IT ISN'T! 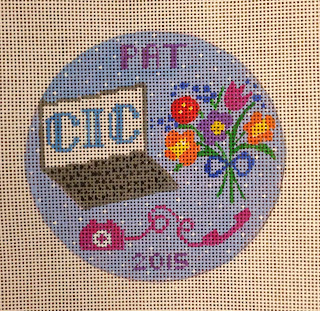 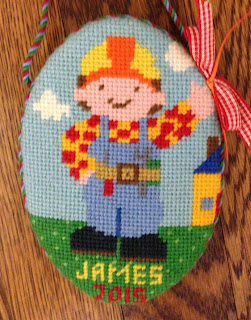 One Bob the Builder ornament - finished.

Now I will try to find others.
Posted by DeElda's Creative Arts Blog at 3:26 AM No comments:

Life seems to have gotten in the way of doing any blogging for a couple of months. School was out, summer led to more than a few things to do and getting ready for the Blowing Rock Art in the Park show took up more than the 24 hours of every day.

Settling down is not exactly what is happening currently but here I am for a few mintes at the crack of dawn.

Production of needlepoint canvases and quilts has been steady to more than normal which is the good news. Needlepoint is gaining even more strength here in NC so that is fun for me but it doesn't leave a lot of quilting time during daylight hours.

During this busy time. I finished up a very fun and colorful bedroom in CA for a client. Bed skirt, bed shams and drapes to match a quilt that was purchased late last year. The room was completely redone around the quilt. The extra fun part was that the couple uses very vibrant color throughout the home and this project was no exception. Artwork ready to be added above the bed! 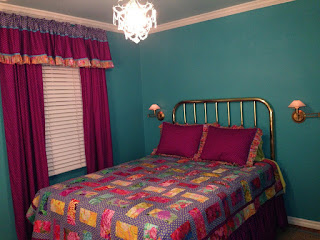 Posted by DeElda's Creative Arts Blog at 4:16 AM No comments:

And I am Starting to Build an Ark!!!

The rain just doesn't seem to stop here in Charlotte for more than enough time to run outside, turn on the lawn mower, muck it up with wet grass, turn it off, and come back inside. So, a lot of inside work is getting done.

I have decided that I need a SERGER as I have a project in my mind only that really does need a SERGER. I spent form 5 - 7:30 this morning looking at all of the options and they seem to run from $160 on line, to $5500. Quite a darn difference. I think I will go out to a few shops tomorrow and try them out before making a big mistake. Or a small one - whatever!

This canvas was finished a week ago for a gal to stitch for her son. Pretty cool but lots of stitch counting and painting for me. I have just finished a couple of other large projects and will post these soon. Need to photograph them before sending them out.

Here is the UK canvas. 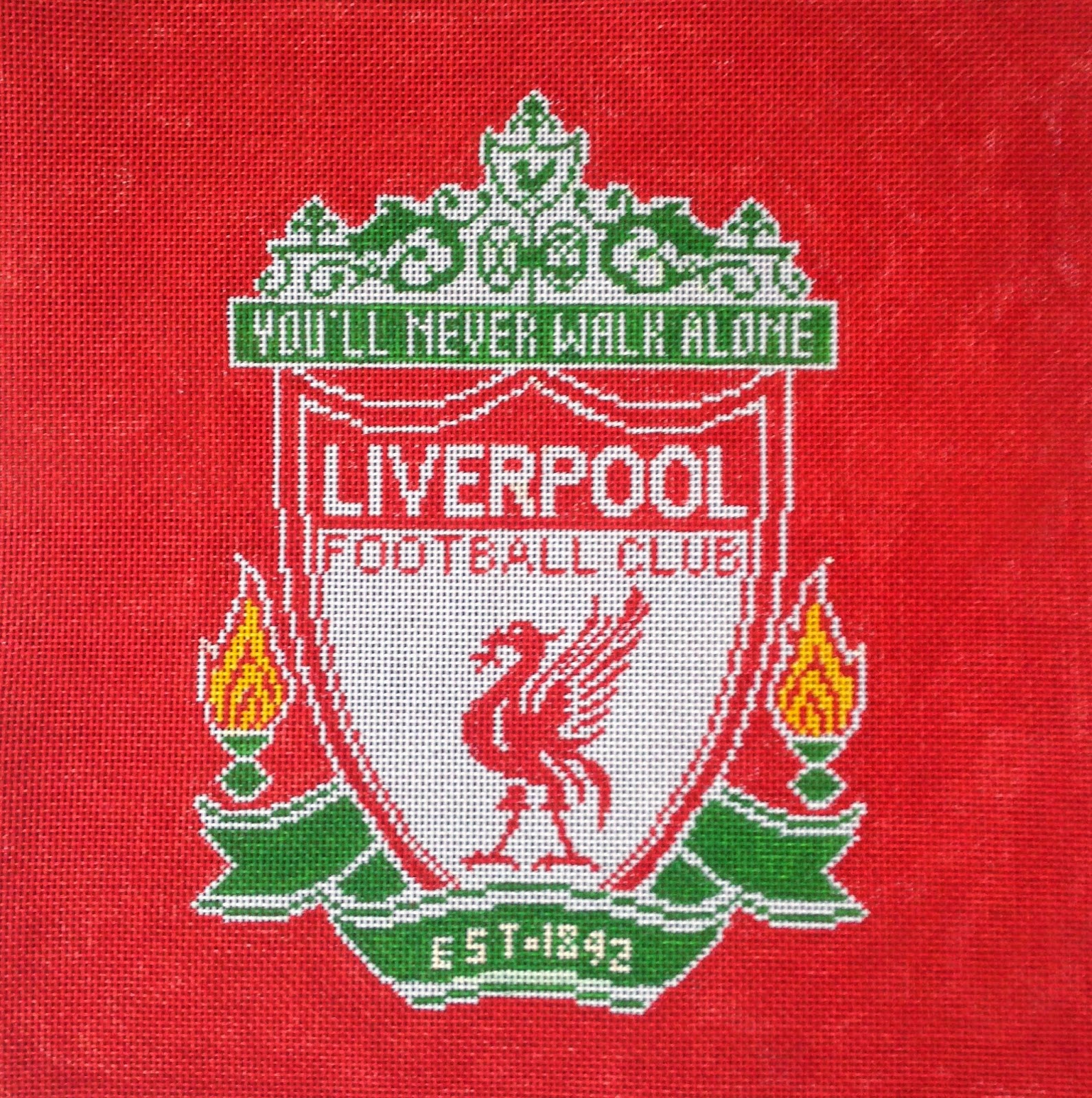 April Showers and the Fun Goes on Here!

I just couldn't resist matching these squares of prints from African fabrics with a lot of interesting batiks. I think it makes a very happy and joyful splashing of colors and patterns. Love it. On the way to being finished and for sale at the Blowing Rock juried art show on June 13. Mountain madness, here I come! Posted by DeElda's Creative Arts Blog at 5:15 AM No comments:

REALLY BUSY HERE IN BOTH STUDIOS!!!

When the calendar changed over to April yesterday I about had a stroke. Into the fourth month of 2015 and lots going on here. So much that if I appeared on the steps of a hospital and they asked me the date - I probably could not even come close and they would wheel me off to the people who fit people like me with white jackets. Not the Chanel kind of white jacket but the ones that have sleeves that tie around in the back so you cannot do damage to yourself. I am not quite there yet, but getting closer day by day!

Seems like this should be February except we are overloaded with February, March and April birthdays and these extravaganzas are about to be over. The most important ones were a special two year old turning 3 on February 3rd and annouced he was now "not a little boy or a big boy but a 'middle' boy." And, so he is.

His brother turned 7 two weeks later and he is truly a "big boy." A little sad at the speed with which they are both changing but a joy to watch them master new skills and try out new attack motives on each other. I am often surprised at what comes out of their mouths in general conversation. Their vocabularies are astounding.

Lots of other family b-days in February. Then we had may daughter and my son both a year older and better in March. And last but not least - my beautiful D-I-L on Easter Sunday. Happy Birthdays for all.

So this is why I have not been on my blog. Excuses, excuses.... and so it goes.

Below is a laid out quilt from a friend who does not care for pink. (She did pick the fabric in a moment of delirium). Those in the quilting realm call this a "stack and whack" quilt. I love pink so will try to get it put together and quilted for her. Then, she can decide what to do with it. 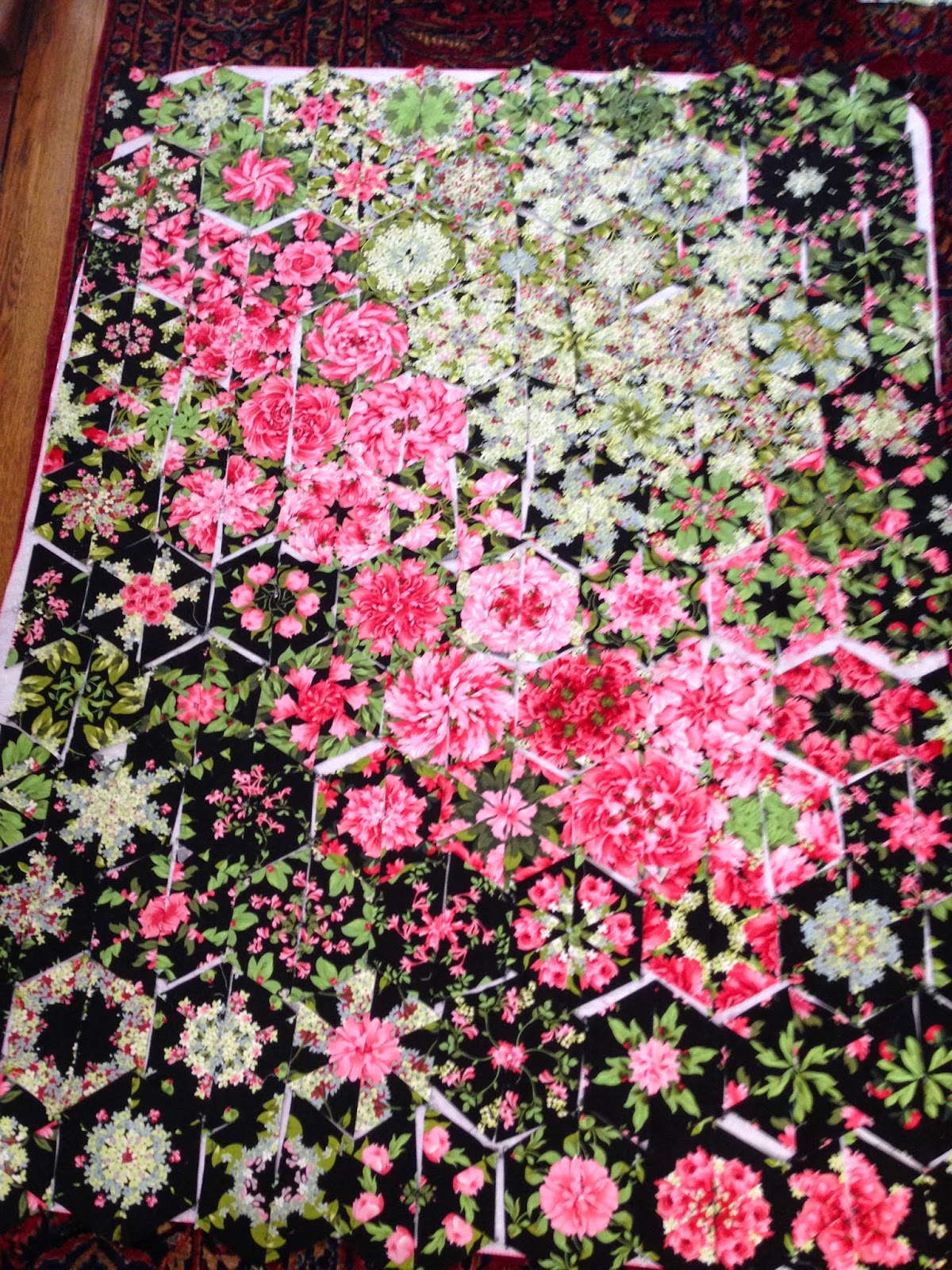 I am also trying to clean out projects from the past. This self portrait was done several years ago when I was doing these for others. Baby photo of me surrounded by cut out photos of my two children and paint chips as I am always painting something. Wooden mixing spoons for the arms (painted) holding a bouquet symbolizing being a Master Gardener. Frosting decorating tips with a few tassels, sayings and photos of different life events and plungers for legs. I had a bathroom that really had a problem stool. Lots of plumbers in my past. This hangs on the wall and I decided it had lived a good life and out it goes. So, here it is/was!

Posted by DeElda's Creative Arts Blog at 1:44 PM No comments: 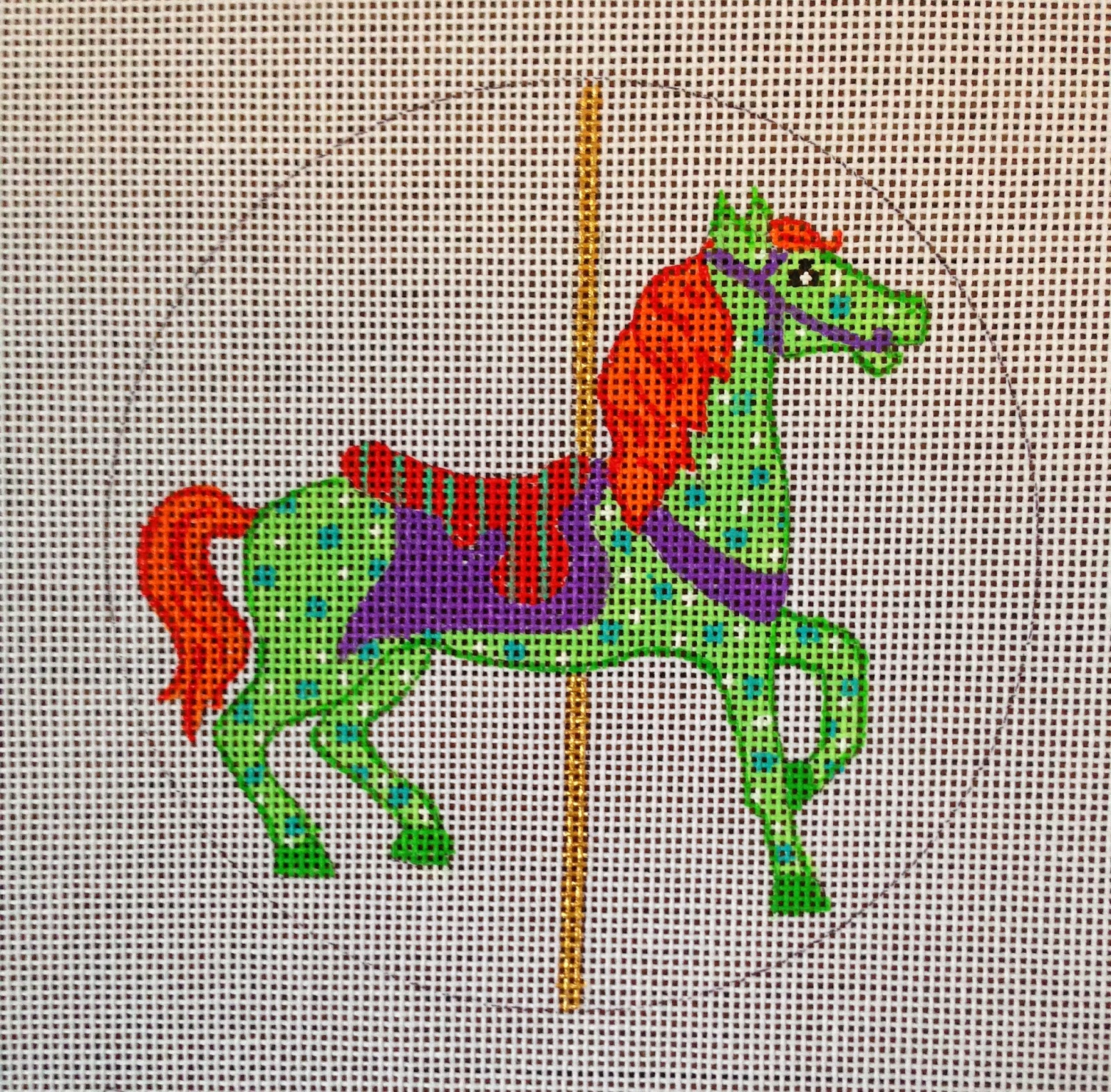 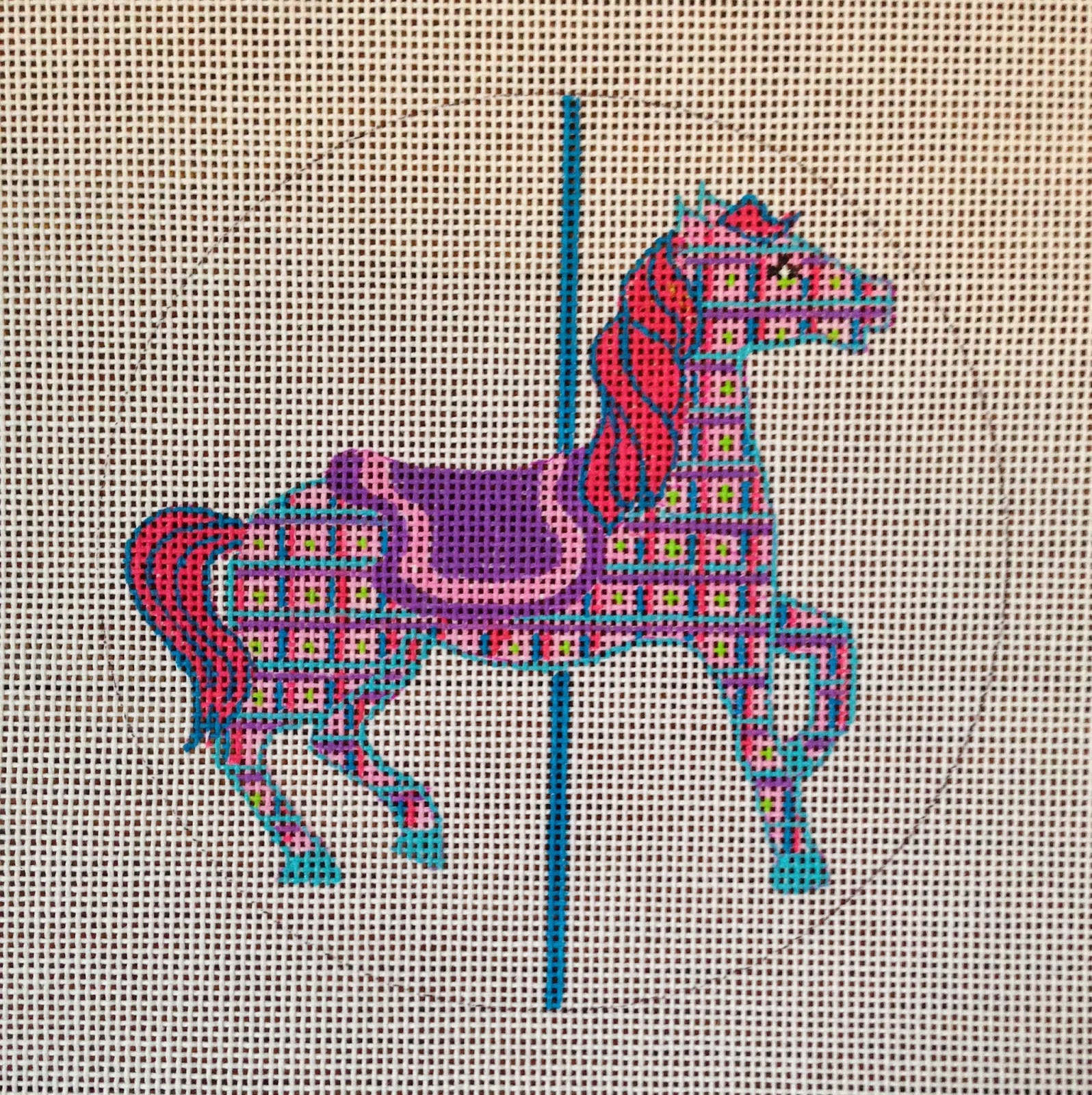 Well, the first carousel horse has morphed into orders for several more. I didn't want to paint the same horse over again so I am just picking the first color I see and begin to work off of that. Hopefully, these will delight the shop owner. I think they are pretty cute. 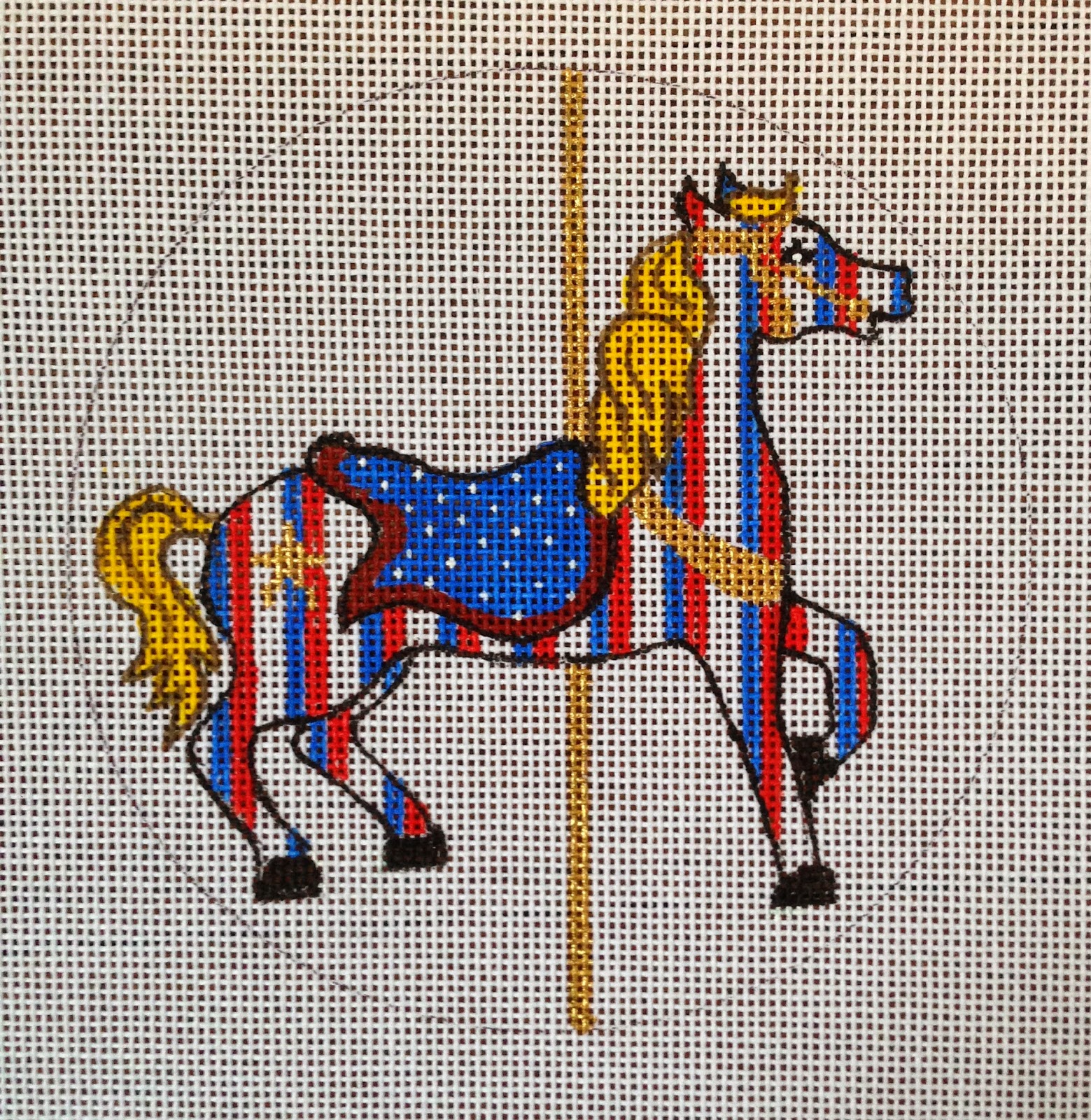 Posted by DeElda's Creative Arts Blog at 6:21 PM No comments:

It's Been a Busy Couple of Weeks

Probably what makes the days fly by are in and out visits of two little boys. And, I temporarily forgot....one was out of school 3 days this week. Very cold temperatures caused broken pipes at James' school so he was with me on Monday and Tuesday. Then the 9 inches of forecasted snow ended up being 1 1/2 inch and school was called off the night before when the storm started. Thus, no school on Thursday.

I have been painting and cutting fabric for quilts. I have found a person who has graciously agreed to sew a few quilts together for me and for that I will be eternally grateful. This leaves me with a few hours to design the next quilt - yeah. I even finished up two that needed small tweaks.

So, in between making peanut butter and Nutella sandwiches and dispensing buckets of chips for starving boys, I have gotten a lot done. Just no postings. So, here they are.

Forgot to mention we had a couple of birthdays too! 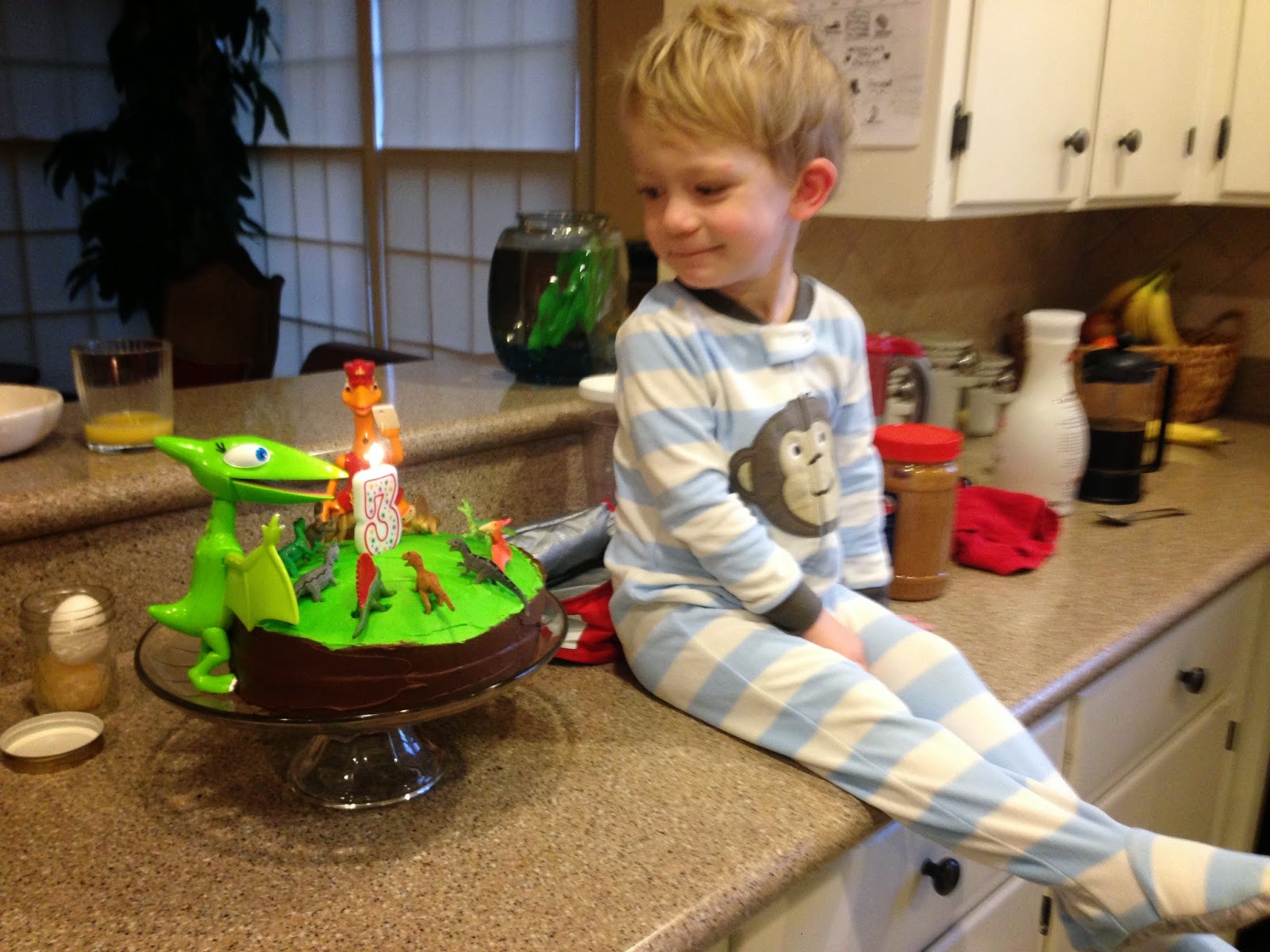 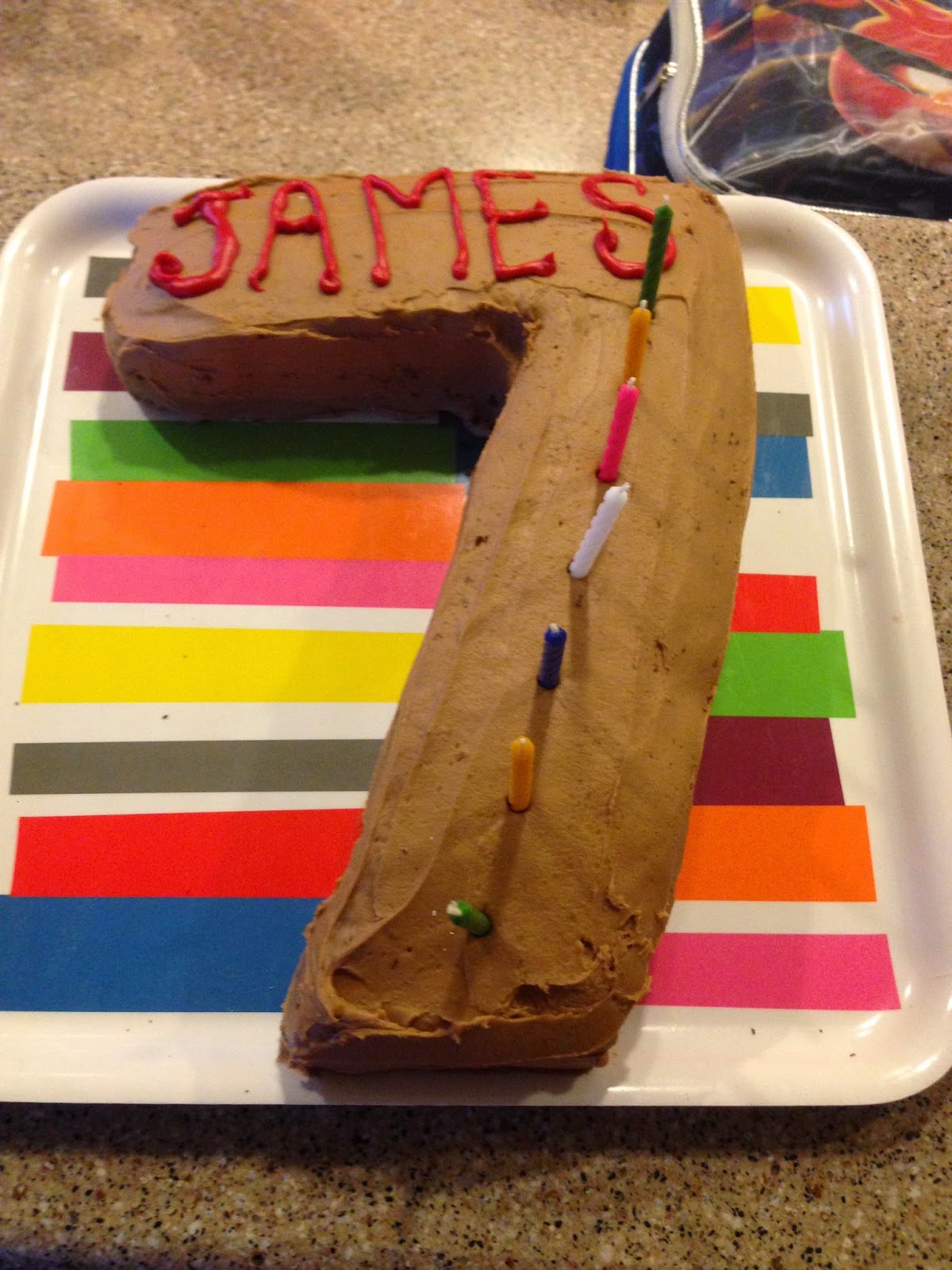 One birthday boy in disguise. 7 and 3. All great celebrations early in the morning.
The folowing are simple "theme" flannel quilts. Getting ready for next winter during this cold spell. 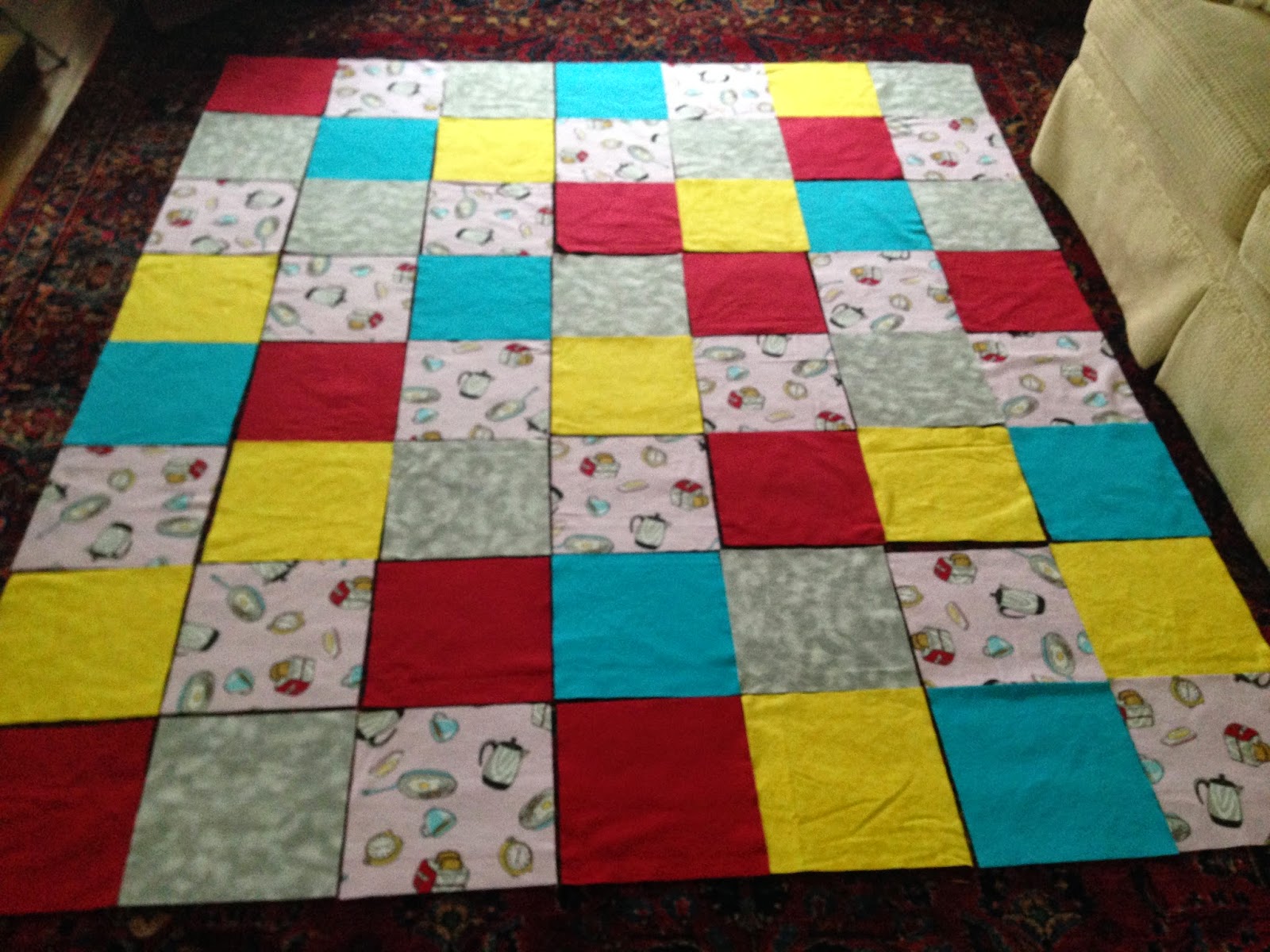 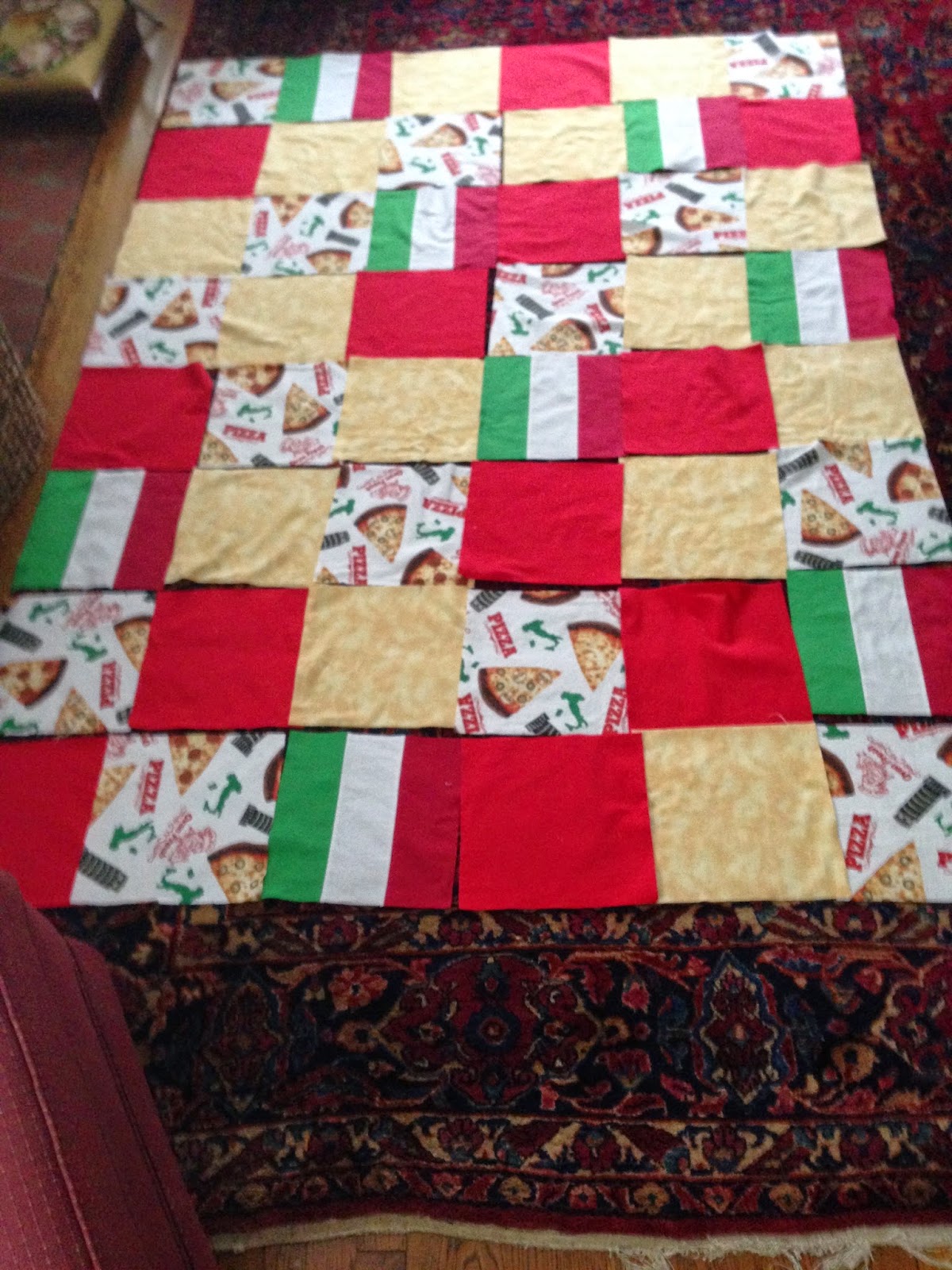 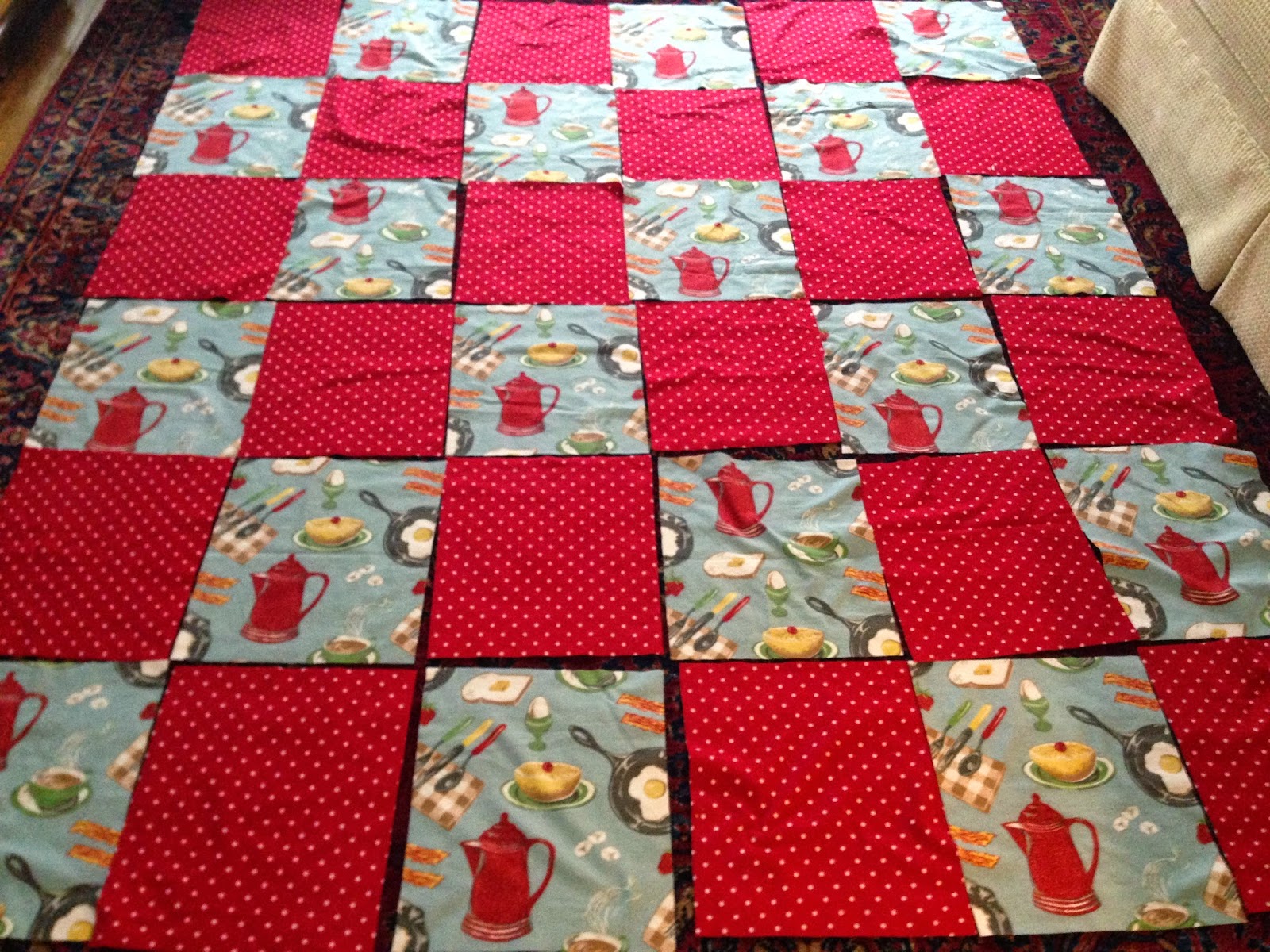 I am thinking warm and breakfast and coffee! And, maybe a little pizza later!
STAY WARM, NC and Iowa!

Posted by DeElda's Creative Arts Blog at 6:32 PM No comments:

I really got rolling last week in the painting room here and had a good run, so to speak. Here's the proof.


Posted by DeElda's Creative Arts Blog at 9:27 AM No comments:


I thought perhaps it might be fun to show these two quilts that I made after trip to Ireland and England. Both represent my view of the wonderful colors and gardens that I was lucky enough to visit. 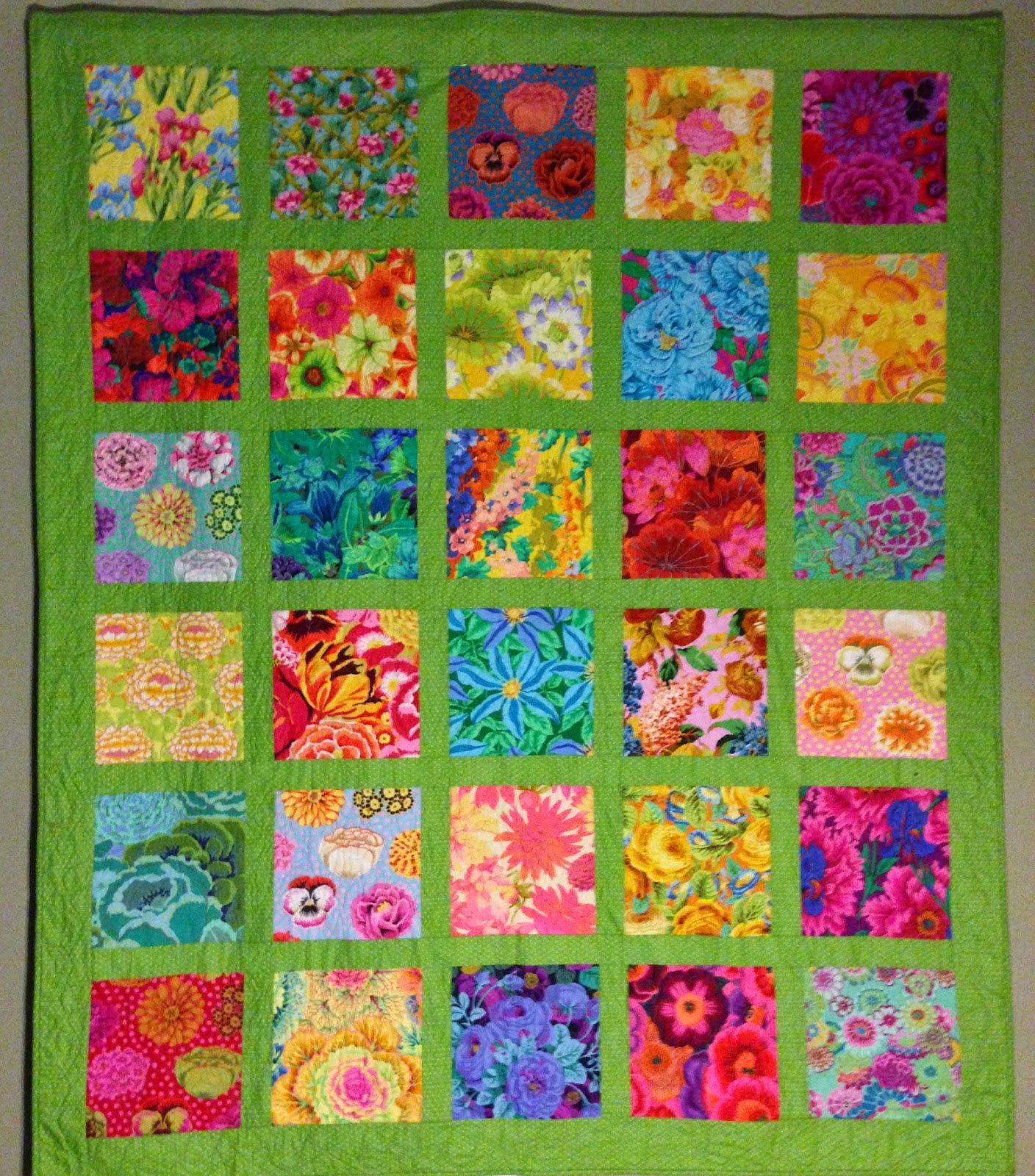 Shades of Ireland - fields of green and wheat with dark green hedgerows squaring it all off.

Both of these quilts were designed the same with 10 1/2" blocks. Both bring back wonderful memories for me.

Simplicity is sometimes the best. 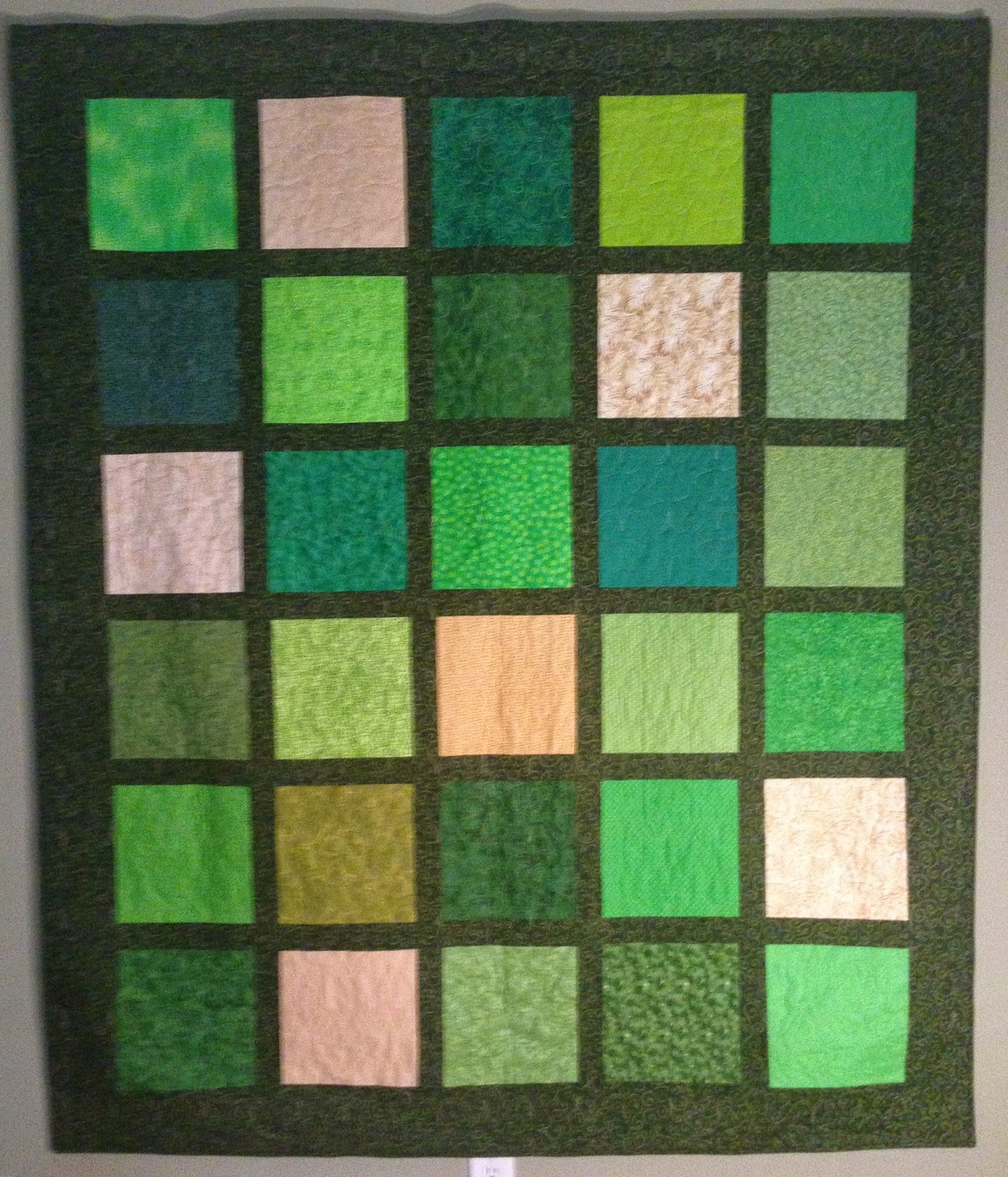 Posted by DeElda's Creative Arts Blog at 6:55 AM No comments:

Here are two cute needlepoint canvases for brothers that I designed a couple of weeks ago for a Mystic Needle Nook customer. A lot of the same baseball "stuff" but a few differences to make them special for both Charlie and Jack. The customer did not want red on the canvases so I lightly marked in "red permanent marker" the baseball stitching on each and decided she could use another shade of gray if she just couldn't do red. I - personally - love red. It is perky! And, so it goes.... 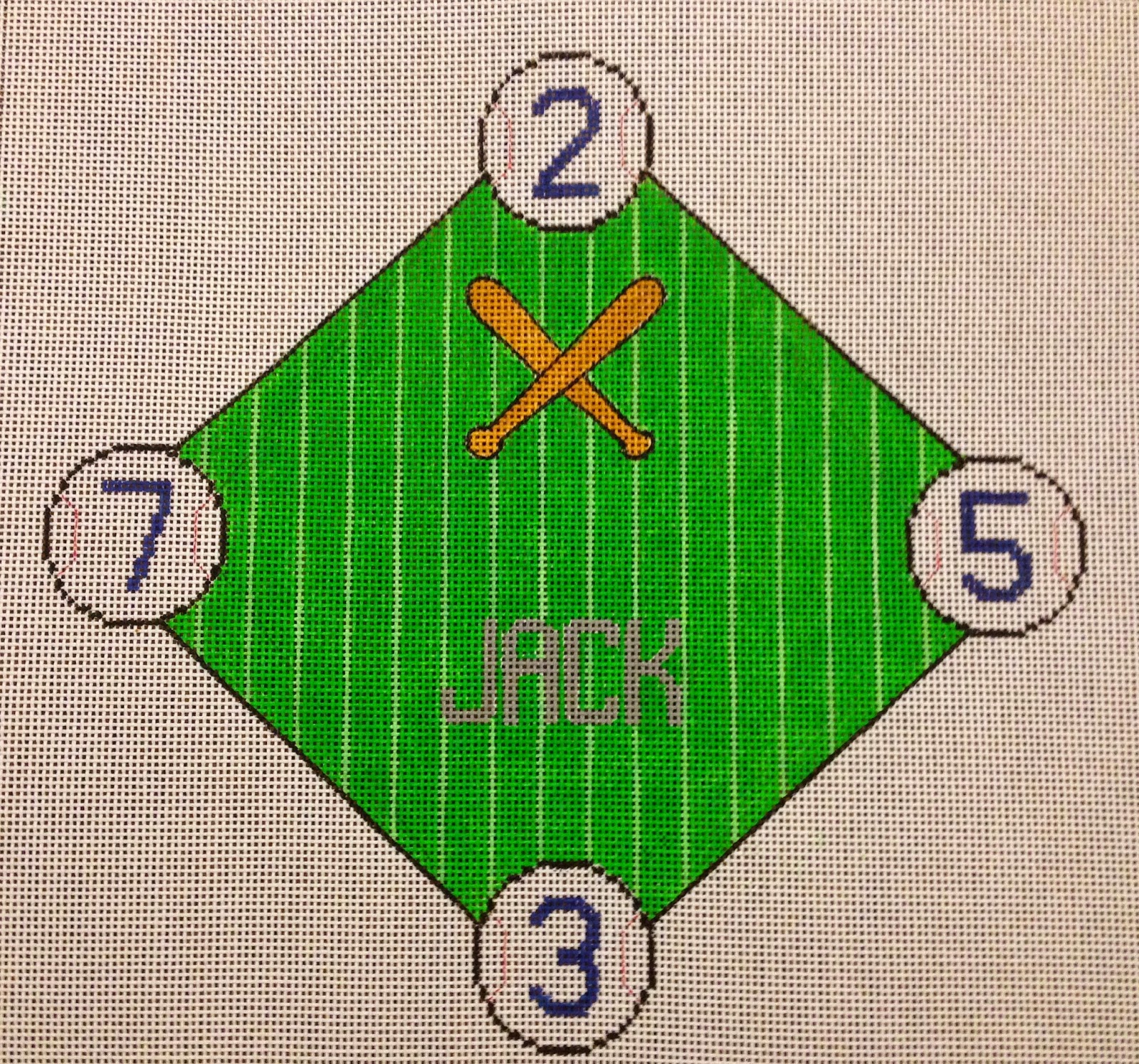 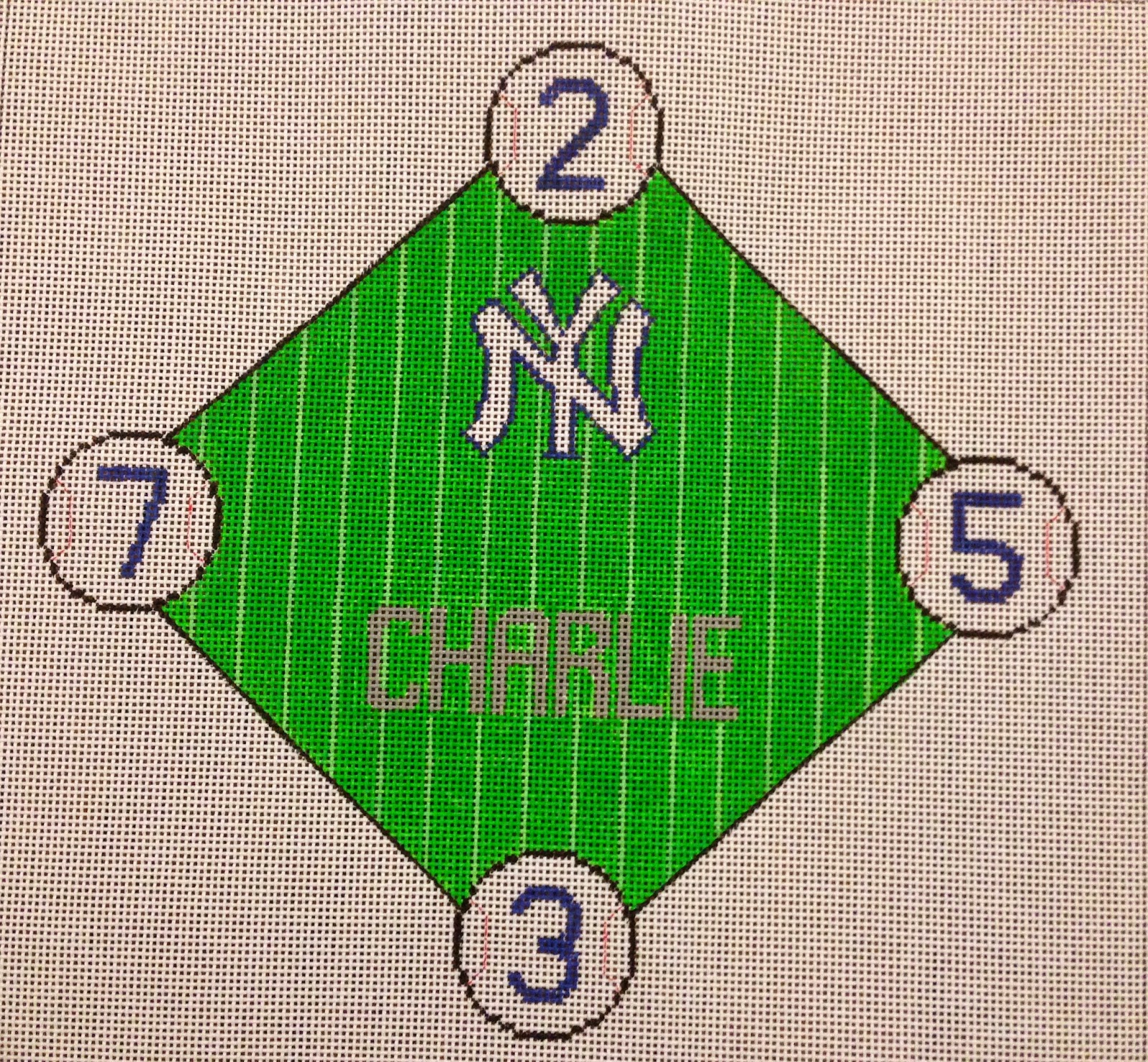 Posted by DeElda's Creative Arts Blog at 9:15 AM No comments:

A LITTLE BIT OF EVERYTHING....

It is beginning to occur to me that the "business of business" keeps me so busy here that three blogs a week seems a little impossible. It isn't as though I don't think about doing a blog, it is just with needlepoint and quilting projects up the wazoo, I always have somehting in my hands in the evening precluding the action of opening the computer and writing a blog.

Little boys next door come and go many times a day, often from 3 and 6 pm and I cannot resist that distraction! 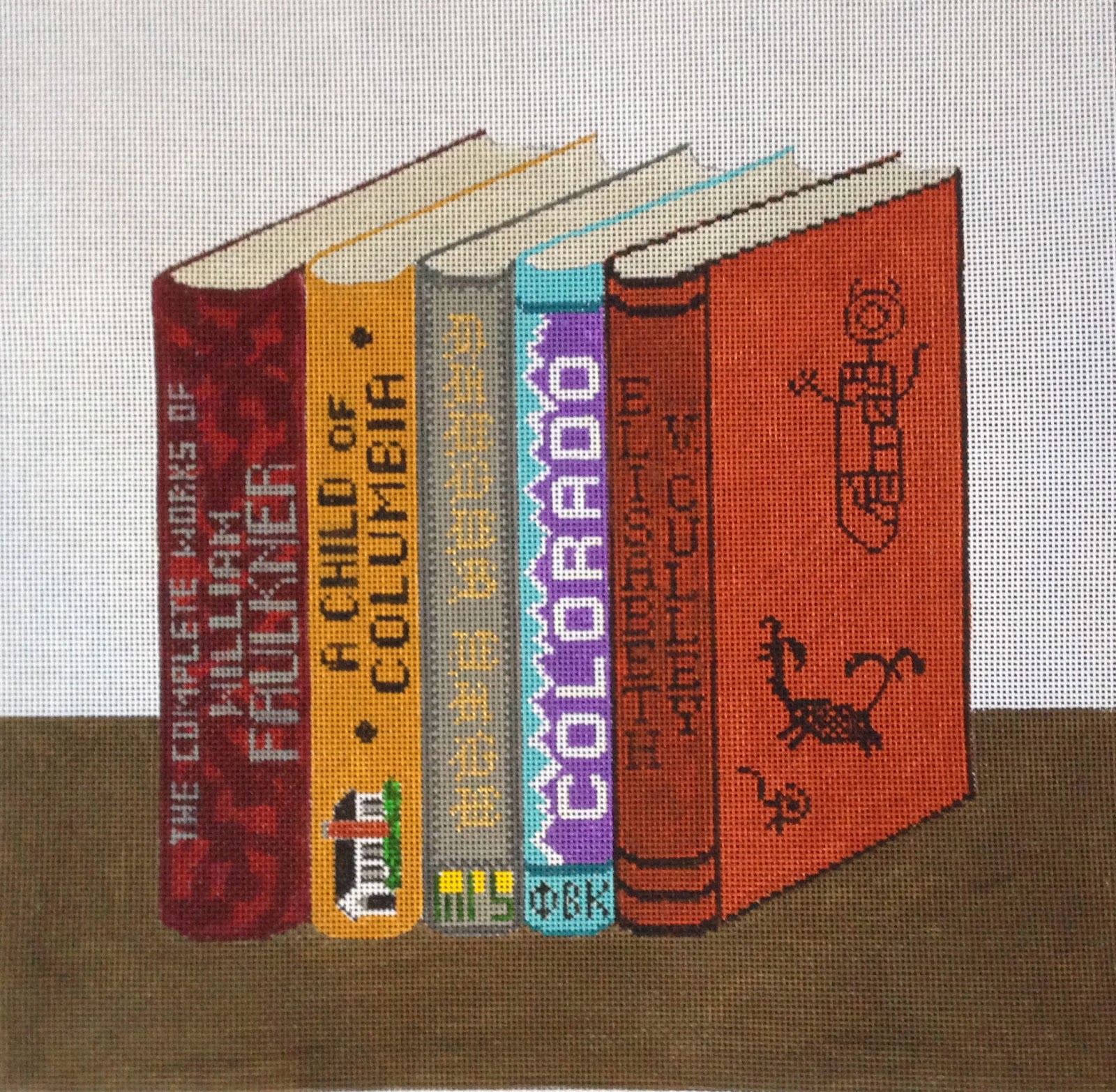 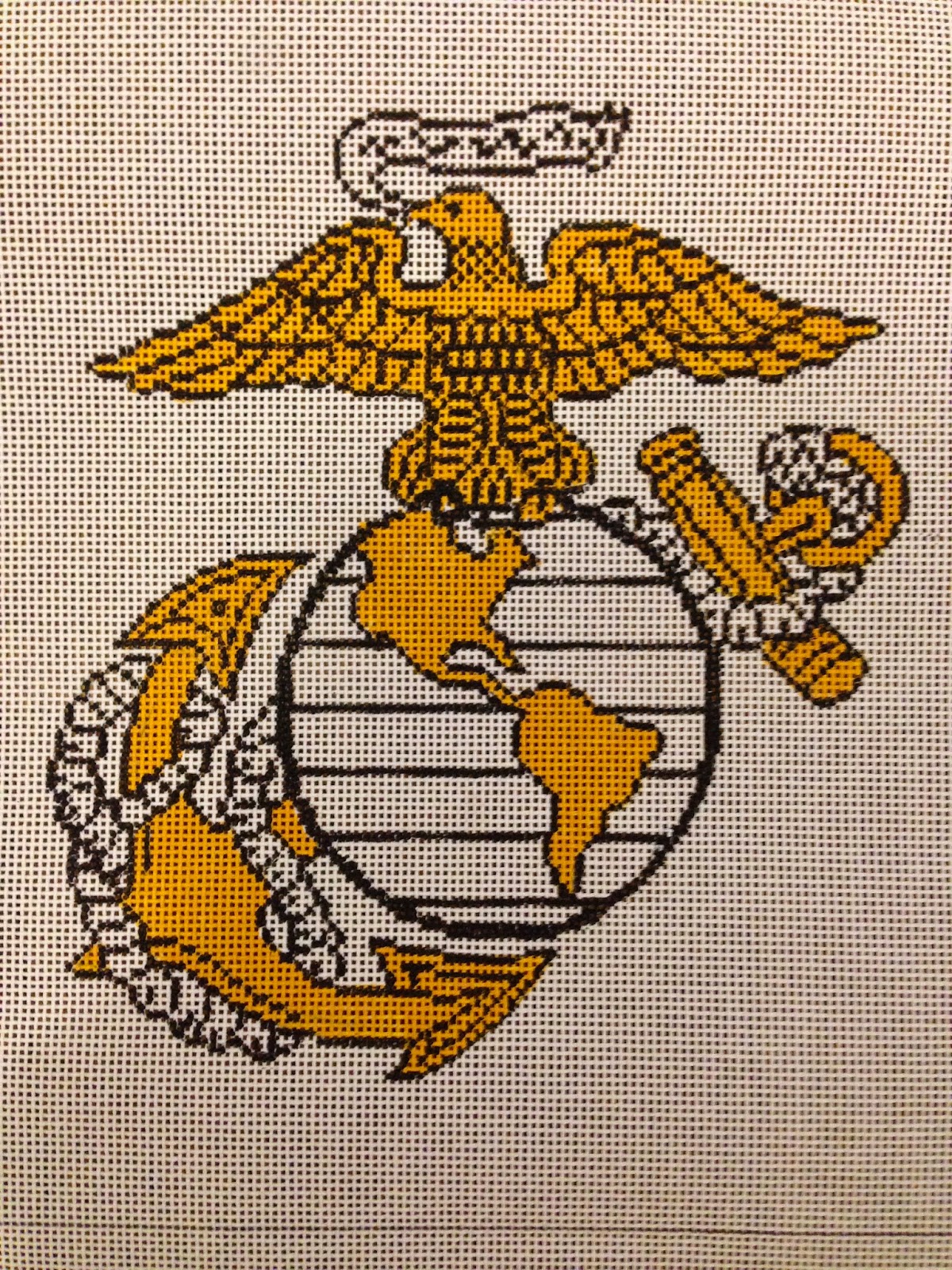 Here are a few of the needlepoint projects that have left the studio in the past two weeks and some quilts that are building up into a huge pile of color. 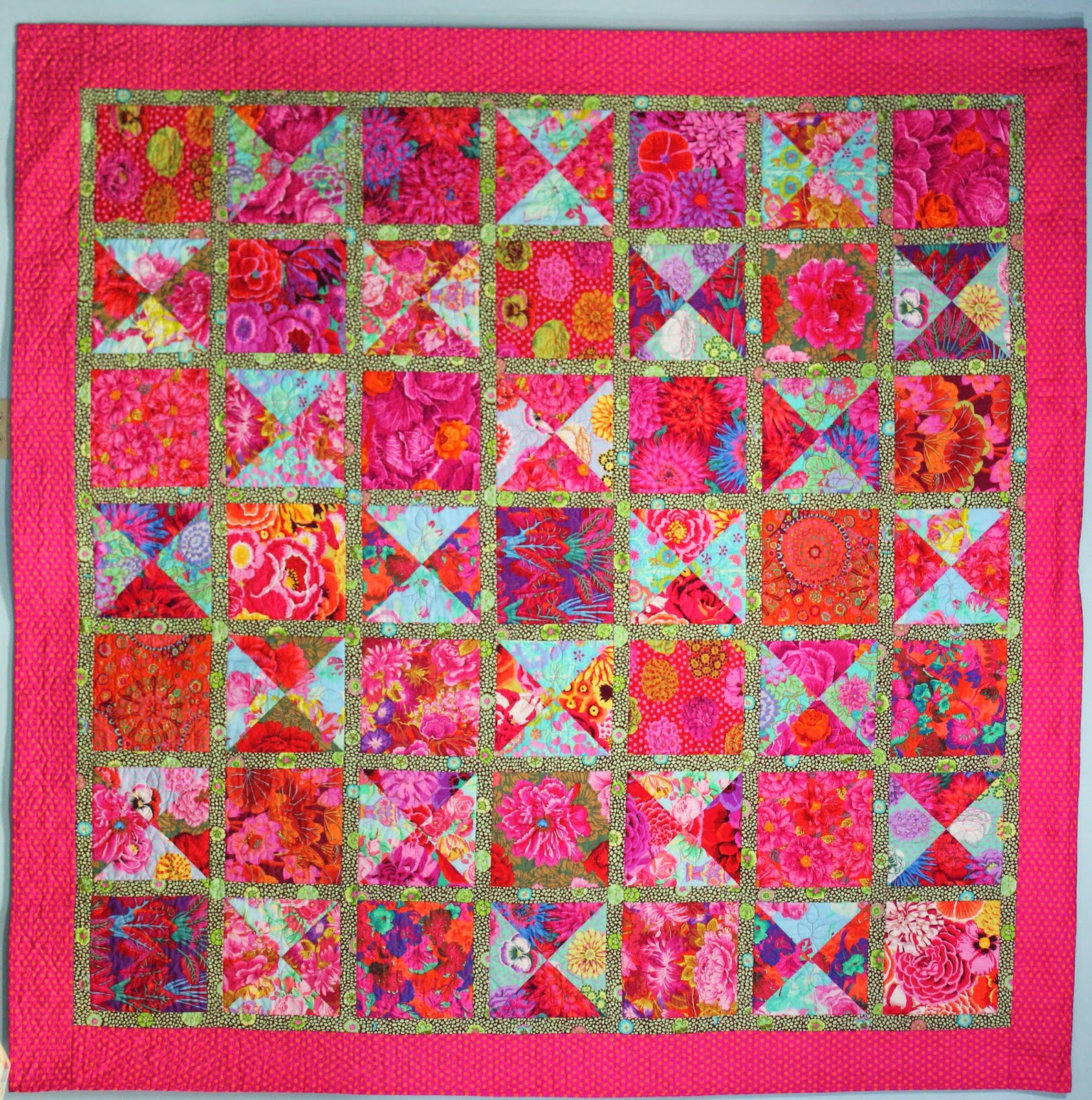 I took this class with Cate's three sisters and we all made this quilt. I used Kaffe Fassett florals. Queen size. 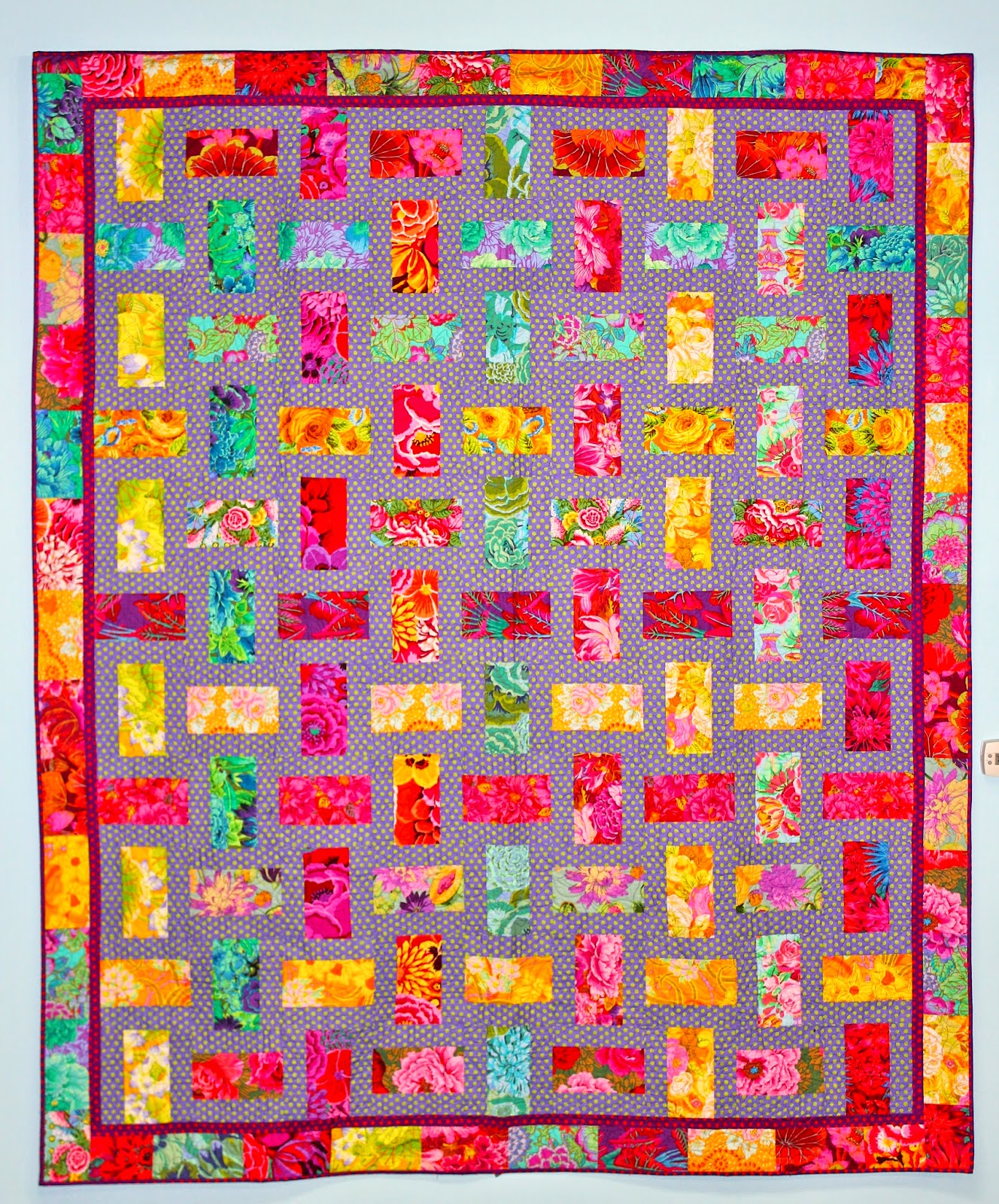 The queen quilt to the right was adapted from Fons & Porter's Love of Quilting magazine and designed by Kris Peterson. Love it! More Kaffe fabrics. I am obsessed with these florals. Using them for a lot of projects. Colors here are not very true. Sashings are the purple/lime dot and lots of pinks and reds and turquoise and some soft yeloows. It looks 'glow in the dark' crazy in some of these photos. I'd better get more accomplished at editing these.


Posted by DeElda's Creative Arts Blog at 6:37 AM No comments:

Well, here we go into 2015 and my time between Christmas and last night was filled with cutting out quilt pieces for SEVEN quilts. There were scraps everywhere. Now I guess I had better get to work on getting them sewn together.

I painted a little bit of needlepoint and started several custom pieces that I will be working on for awhile.

Here are a couple of photos of projects.

Two flags for a friend whose daughter has lived in many countries.
Go USA! Second flag is El Salvador. #18 mesh
This is one of my first scrap quilts and I still love it. Queen size. 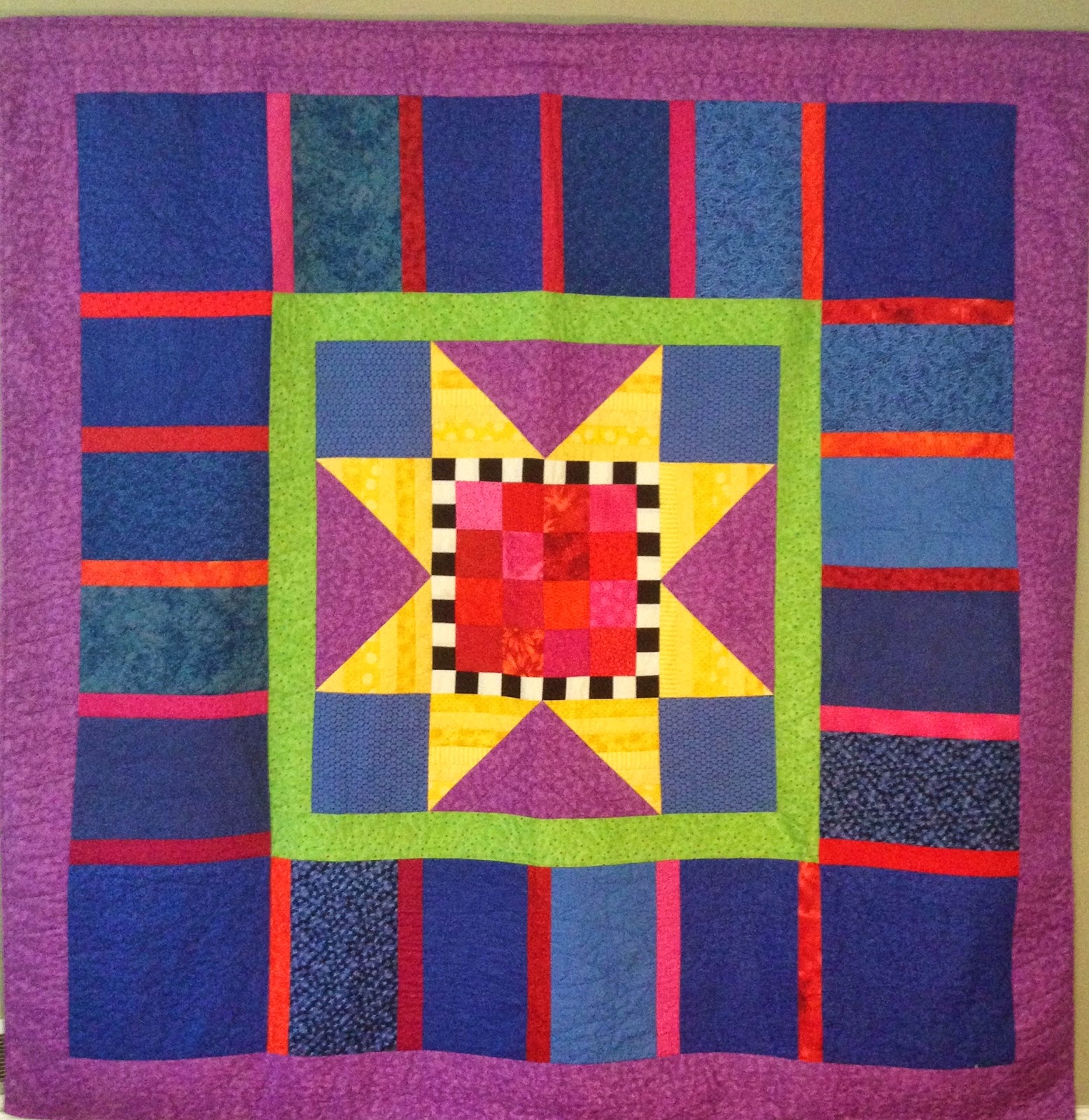 Posted by DeElda's Creative Arts Blog at 6:42 AM No comments: